Fears of a COVD induced repeat of the banking crises from 2008 and 2012 have abated thanks to Central Bank liquidity and the regulatory reforms introduced since then. Might a sovereign crisis still be waiting to happen? We have had 6 sovereign defaults already this year (Lebanon, Ecuador, Argentina (yes again), Zambia, Grenada and Venezuela). This does not include the 43 countries who have deferred payments under the Debt Service Suspension Initiative agreed by public sector borrowers in April this year. 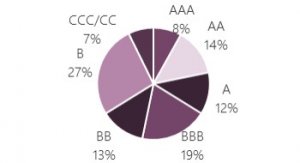 More than a third of sovereigns are now rated B or below by S&P, as shown in the attached chart. Are more defaults to come? 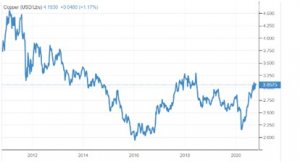 Zambia is an illustrative case of the challenges faced by poor indebted countries.

With a population of 17 million and a GDP per capita of US$1,419, Zambia had reasonably strong growth of 4% pa for the 5 years to 2017. As Africa’s second largest copper producer, it enjoyed close relations with China and was a significant beneficiary of Belt and Road Initiative investments. Copper revenues provide 70% of its export earnings but the price has been severely impacted by slowing economic growth in China and the pandemic as shown by the above chart. (In 2000 China represented only about 10% of global demand for copper by 2018 this rose to ~ 50%: Source: World Bank Commodity Market Outlook April 2020.

Zambia owes some $3.5bn in bilateral debt, $2.1bn to multilaterals and $2.9bn to other commercial lenders. It owes about $3bn to China and Chinese entities. The currency (kwacha) has fallen nearly a third since the start of the year, making these payments unsustainable.  Interest payments total c. 20% of revenues. High debt service costs arise partly due to non-concessional loans under the BRI financing and also to very high local interest rates. Yields on local currency T bills rose to c. 20% but the Government still has challenges rolling them over with local investors recognising the credit risk even in domestic currency.

In September 2020, Zambia told holders of Eurobonds there would be delays on the payment of $120 million of interest on $3 billion bonds. International investors are demanding equal treatment and greater transparency on the payments of debt service to Chinese lenders.  The failure to repay loans to China could lead to the Chinese taking over Zambia’s airport, electricity company (Zesco) and major road projects.  A Chinese company, Start Times, already controls 60% of a leading national broadcaster.   China and other public sector creditors also want private sector investors to share the burden. Luckily, creditors are talking and getting creative. Revised standards have been released for managing sovereign debt restructuring endorsed by the Paris Club of creditors and also the G20 including China. The IMF has also come up with some interesting proposals to introduce new terms into sovereign debt issuance, such as negative pledges, contingent repayments, extendable maturities etc.

All good initiatives – but we must always remember, sovereign debt is anything but risk free. Inevitably there will be more defaults and these will rebound on the banking sector both indirectly through downgrades and directly through losses on their sovereign exposures.